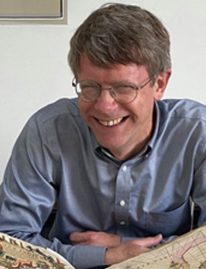 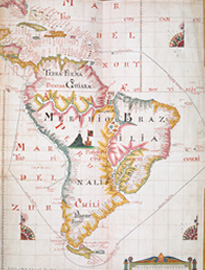 Shipwrecks, Treasure, and Maps at the End of the Seventeenth Century: The Manuscript Atlases of William Hack

Cartographic historian and New York Map Society member Chet Van Duzer spoke on “Shipwrecks, Treasure, and Maps at the End of the Seventeenth Century: The Manuscript Atlases of William Hack.”

In this talk, following a look at some of the equipment available in the 16th and 17th centuries for recovering material from shipwrecks, Chet discussed the manuscript atlases made by the English cartographer William Hack in the latter part of the 17th century. Hack’s beautiful maps, copied from a derrotero captured from a Spanish ship in 1680, show the locations of a number of shipwrecks, which is unusual in seventeenth-century maps. The maps in his later atlases include indications of the amount of treasure that was on those ships. This change was inspired, believes Van Duzer, by William Phips’ spectacular recovery of treasure from a Spanish wreck in 1687. Phips, later the Governor of the Province of Massachusetts Bay, arrived in London with his riches a hero, and his recovery of the Spanish treasure increased appreciation of shipwrecks as a potential economic resource. It seems to have been this success that inspired William Hack to add information about the values of the goods on shipwrecks to his maps.